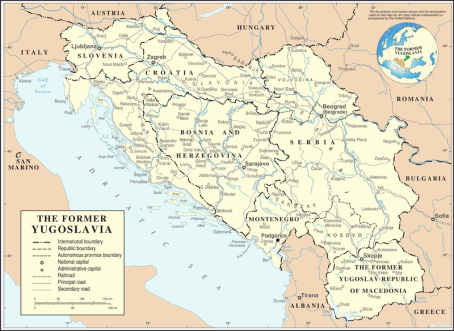 The countries that were once Yugoslavia are both bound and repelled by such tumultuous history that their close language ties are twisted by politics. Communication to each of them must be handled carefully, no one exactly like any of the others.

Among these seven countries — Serbia, Montenegro, Kosovo, Slovenia, Macedonia, Croatia and Bosnia-Herzegovina – there are languages spoken that are essentially the same, but the fight for individual identity plays out in staunch refusal of any one “language” to be absorbed by another. Bosnians, Croats, Montenegrins and Serbs understand each other perfectly, and linguists identify the four languages as the same language with different labels; but nationalism, fueled by late 20th century wars, is crystallized in language labels that carry the added significance of who is “us” and who is “them”.

So the official, similar languages of Bosnia and Herzegovina (population just under 4 million), Croatia (population almost 4.5 million), Montenegro (population about 620,000), and Serbia (population over 7 million) are respectively: Bosnian, Croatian, Montenegrin and Serbian. They are the same linguistically, with different names. And the complicating factor is that there are just enough variations among them that an individual from any one of these four countries would notice if the language in your marketing or product materials was created for one of the other countries/languages.

The majority of Kosovo’s citizens speak Albanian; Serbian is the second official language in Kosovo (population just under 2 million).

As far as which countries to approach with your products, some of these seven countries of the former Yugoslavia have EU membership, ties to NATO and historically strong ties to the U.S. and/or Europe. In varying states of peace, stability and openness to trade, they must be examined one by one for specific demographics in the cities and regions where you are considering doing business. Translations and localization for these close neighbors will always be distinct from one another.

Skrivanek has experienced linguists and subject matter experts across the region to help you ensure that all of your materials are country appropriate.

For more details, please refer to our website: www.skrivanek.com.

One thought on “Language Identities in the Countries of Former Yugoslavia”